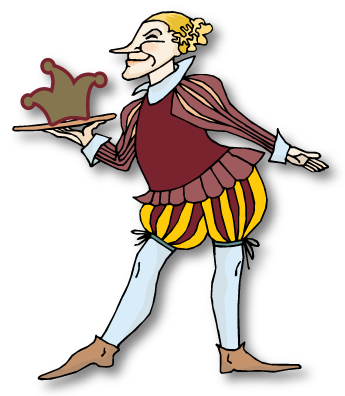 The Joker is the most elusive of all characters inside the Kings Court. There are many words used to describe this persona: clown, gymnast,juggler, musician, poet, singer, actor, even scholar. The overall qualities of the Joker vary from persona to persona, and have provided comic relief throughout history. This is probably where the roots of all comedy began.

The Joker has the power without the fanfare of having the power. This Fool is no Fool and has the acute sense to point out his Master’s folly in such a manner that the Master is able to see it for himself. The Joker will always agree with the Ruler’s decision wholeheartedly and then in an animated fashion, subtly highlight the stupidity. Which in turn, causes the King to see for himself that maybe his original idea was not such a good idea after all. The Joke is on the King.

Maybe the King is not the smartest in all the land that he rules. Perhaps we should add Thief to the list of the Joker’s many talents. There has been much documentation and discussion of the Joker stealing the King’s crown.

Here at The Joker’s Crown …

We have all the proof we need.
Bon Appetite!